Home » Maryland » Montgomery » Factors That May Have Led To Lower Stink Bug Numbers In Rockville, MD

Factors That May Have Led To Lower Stink Bug Numbers In Rockville, MD

Not too long ago there was a gas station fire that shut down a portion of Rockville Pike. Thankfully, nearly 85 firefighters from Montgomery County Fire and Rescue had the fire under control in almost no time. Also, everyone was evacuated and no injuries were reported.

This close save reminds me of Robert Frost’s poem, “Fire and Ice.” While we may continue to debate over how the world will end, and symbolism, as a resident of Rockville, MD you probably enjoy getting your ice fix at the Rockville Town Square, Cabin John Ice Rink, or Rockville Ice Arena.

Speaking of ice, as the weather gets colder and colder the Polar Vortex from earlier this year comes to mind. It was so cold, with below-freezing temperatures that research was quoted saying 95% of stink bugs would be wiped out! What a wonderful silver lining to the cold-out-of-your-mind cloud! But if something sounds too good to be true…

There is no new research on this topic,” he writes. Furthermore, the lab experiment can’t easily be applied to real-life scenarios because stink bugs tend to seek shelter during the winter. “Severe sub-freezing temperatures will negatively impact winter survival of these stink bugs if they were unable to find suitable shelter such as inside of houses and sheds,” he writes. Read more at Mental Floss…

So as entomology professor Thomas Kuhar states above, the research from 5 years ago may not be accurate, especially because most stink bugs diapause every winter indoors.

Even so, there is some good news here in Maryland, where an understated bug seems to have reduced the dreaded stink bug population. 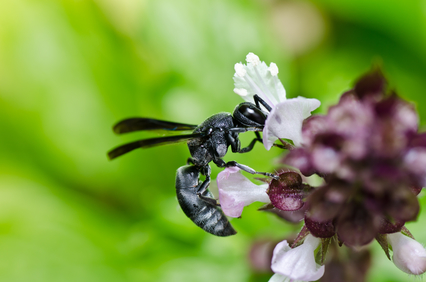 This effect of the samurai wasp injecting its egg into the stink bug’s egg, then eating the stink bug’s egg before emerging, has been studied to see how it can be used to fight stink bugs. The fact that it’s already happening naturally in our own backyard is likely the reason stink bug numbers are going down.

Another occurrence at the beginning of the year that seems to be as far away from stink bugs as the east is from the west is the government shut down. Turns out researchers that are funded by agencies like the USDA had their hands tied, some more than others, earlier this year.

USDA entomologist Don Weber, who works on biocontrol agents at the department’s Beltsville Agricultural Research Center in Maryland, isn’t completely immobilized. He is allowed to enter his lab a few times a week to maintain insect and plant populations. But he can’t do studies. Nor can he mail invasive stink bugs from his colonies to other researchers who want them, hobbling efforts to find a defense against the growing farm pest. Read more at ScienceMag…

So this is how stink bugs and the partial government shut down are linked. We’ve already pointed out how detrimental stink bugs are to American crops and how they cost farmers lots of money. This is why research into lowering their numbers is vital. But the longest shut down in history may have delayed finding that silver bullet against stink bugs.

Have these dreaded pests invaded your home, despite the fact that their overall numbers have gone down? To get rid of them effectively, contact Backyard Bug Patrol. We provide stink bug control and eradication with an organic touch. We look forward to ensuring that stink bugs are not a problem in your home this season. Call us today!