A ‘Fungus’ Plus ‘Spider’ Mosquito-Control Combo For Residents Of Ashton, MD?

If you’ve been a fan of Backyard Bug Patrol Blogs for the past 2 years or longer, you’ve learned a lot about mosquitos. Like how to avoid them by eliminating stagnant water. You’ve received tips on what to buy at your local CVS just down the street to treat mosquito bites. You’ve even gotten the 4-1-1 on research being done by our very own University of Maryland personnel, to reduce mosquitos and the diseases they cause. We’re glad to report that there are some recent updates to this last research point.

But first, you may be thinking “Summer is over so mosquitos are gone, aren’t they?” Well, not really.

Mosquitoes can spend the winter in any life stage but rarely do they live as pupa all winter long. Most species survive as eggs in the soil in a dormant state called diapause. The diapause is a state in which the eggs do not hatch in response to flooding. Instead, they wait for the days to grow long. Mosquitoes also spend winter as larvae living in water beneath trees and soil in cypress swamps. Here they avoid freezing temperatures while the cold water slows their development and metabolism. Many species can survive the winter in protected places as adult females. The males almost never survive. The adult females that do overwinter are inseminated and live most of the winter in diapause. Rarely do they bite, but salt marsh species in the genus Culex can be a nuisance on warm winter days in the southern reaches of Maryland. Read more at Maryland Gov… 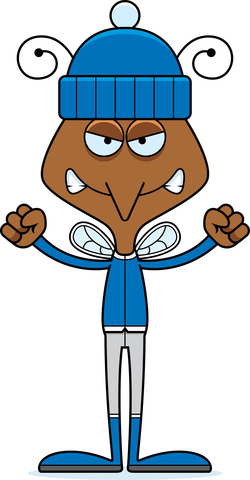 So technically, mosquitos aren’t gone, they’re just resting and though it’s been getting cooler and cooler, rare warm days can “wake up this sleeping giant.” It’s good to keep this in mind and call the team at Backyard Bug Patrol to make sure you’re set up defensively against mosquitos all year round.

The fungus is a naturally occurring pathogen that infects insects in the wild and kills them slowly. It has been used to control various pests for centuries. The scientists used a strain of the fungus that is specific to mosquitoes and engineered it to produce a toxin that kills mosquitoes more rapidly than they can breed. This transgenic fungus caused mosquito populations in their test site to collapse to unsustainable levels within two generations.

“You can think of the fungus as a hypodermic needle we use to deliver a potent insect-specific toxin into the mosquito,” said St. Leger. Read more at University of Maryland…

The “insect-specific toxin” that Raymond St. Leger, a co-author of this study and a Distinguished Professor of Entomology at the University of Maryland, is referring to is an insecticide called Hybrid. It’s interesting that mosquitos, especially those spreading malaria, are becoming more insecticide-resistant, yet an insecticide is what’s probably going to end up beating them. But where does a spider enter the equation? Hybrid is actually made from spider venom! It’s also EPA approved for use on crops.

Our previous post on this topic touched on this study. But at the time, it was still more or less in the lab phase. 2 years later, how effective is this fungus/insecticide combo AKA transgenic fungus anyway?

A 6,500-sq-ft fake village – complete with plants, huts, water sources and food for the mosquitoes – was set up in Burkina Faso. It was surrounded by a double layer of mosquito netting to prevent anything escaping. The fungal spores were mixed with sesame oil and wiped on to black cotton sheets. The mosquitoes had to land on the sheets to be exposed to the deadly fungus. The researchers started the experiments with 1,500 mosquitoes. The results, published in the journal Science , showed numbers soared when the insects were left alone. But when the spider-toxin fungus was used, there were just 13 mosquitoes left after 45 days. Read more at BBC…

Get out your calculators or just watch the video clip above and you’ll see that 13 out of 1500 mosquitos is a 99% success rate! Those are promising results! Who knows, maybe instead of the fogging that gets done during mosquito season in Maryland, Transgenic Fungus will be the new superhero infected with spider venom (sound familiar to anyone?) to protect the residents of Ashton and beyond from mosquitos.

Remember though, even with vigilantes or superheroes, the police are still necessary and that’s why Backyard Bug Patrol is at your service. Call us today for effective mosquito control!