The Harvest Festival at the Agricultural History Farm Park is just around the corner. If you live in Washington Grove, MD, you may be making plans to take your family to see the farm animals, go on a hayride and enjoy the live historians in costume! However, before you bundle everyone into the van, it’s important to prepare for the outdoors.

Of all the bugs you may encounter out there, mosquitoes are in a league of their own. This is especially so with the recent Zika virus scares and West Nile virus cases. Although the cooler weather may mean fewer mosquitos, a few showers can cause mosquito eggs to hatch, then suddenly they’re everywhere! So it’s important to protect your children using safe insect repellents that are effective against mosquitoes.

The oldest and most tested insect repellent against mosquitoes is DEET. There was a period when folks were scared to use it due to cases of seizures and other side effects, but studies showed these instances were due to misuse or overuse of the product.  After years of study, the CDC, and also AAP (American Academy of Pediatrics), agree that DEET is safe and effective to use for kids.

The American Academy of Pediatrics says that insect repellents containing deet are safe for children as young as 2 months. Bug repellents with deet come in varying strengths — some contain up to 30-percent deet. A higher concentration of deet doesn’t mean a product is stronger, only that it lasts longer. Read more at Parents.com…

So follow the instructions when using DEET for your children. For example, apply the DEET formulation on your hands, and then apply it to your child’s face. Also, make sure you (or another adult) are the one applying it on your child as long as they’re under 10.

Picaridin is another ingredient that has proven effective in repelling mosquitoes. Though it’s relatively new compared to DEET, it’s been used safely for longer periods of time in Europe.

Picaridin is a newer insect repellent ingredient, and is odourless and less sticky when compared to DEET. It may be more pleasant to use, and does not dissolve plastic. Studies have found picaridin to be as effective as DEET; however, it is not as long-lasting and will need to be reapplied more often. Products containing 10 per cent picaridin will prevent mosquito bites in most situations. Read more at RCH.org…

So if you’re looking for an alternative to DEET that’s less greasy and oily, doesn’t damage synthetic materials like plastic, and is EPA registered and both CDC and WHO recommended, pick picaridin. 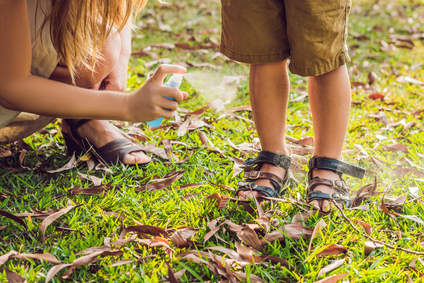 Finally, the third option on the CDC’s list and on ours is the oil of lemon eucalyptus. This is the closest natural product out there that’s effective at repelling mosquitoes. Going by the name alone, you can just imagine the fresh, natural scent it has compared to other products.

Oil of lemon eucalyptus is also known as P-menthane diol (PMD). PMD is a plant-based repellent that gives protection time similar to low concentrations of DEET products. It is not recommended for kids under 3 years old. Read more at Kids Health…

I’ll repeat for emphasis. When you’re in the store shopping for mosquito repellent, only buy oil of lemon eucalyptus if your kids are 3 years old and up. The main reason for this cap on age is because its safety in under 3-year-olds hasn’t been proven yet.

So as you prep for the Harvest Festival and Trick or Treating at the end of the month, keep these mosquito repellents in mind. As for protecting your own home, go ahead and contact Backyard Bug Patrol to eradicate and control mosquitoes so you can enjoy the cooler nights outside safely and comfortably.