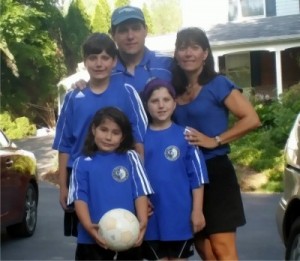 This is the story of the Mitchell Family from Great Falls, Virginia. All five members have been infected with Lyme disease.

It was just two weeks before Christmas 2010, and my hip started really hurting. I thought nothing of it and over the next day or so it got better. That following Saturday evening all hell broke loose. I was in such pain that any movement was excruciating. Tracey finally said, “You’re going to the hospital.” Sure enough, they ran a bunch of tests but couldn’t find anything and at 5AM the doctor finally said, “We can’t find anything, you’re not dying, here’s some pain medicine, call your orthopedic doctor Monday morning”.

So Monday morning we visited the orthopedic doc who immediately said, “I don’t like this, it sounds like your hip is infected”, and he immediately sent me to the hospital to have my hip aspirated. Sure enough, the fluid was “infected”. He exclaimed,

My head swam. “Why can’t I just take some antibiotics?”

“With joints it doesn’t work like that. We can’t leave the infection in there or it will quickly go after your bone”.

It was now less than a week before Christmas and the doctor said I need to have surgery. I became woozy.

Surgery was set up for December 23rd, it went well and I got to go home for Christmas, although I don’t remember much. That next Monday I went back to see the team of specialists who saw me before surgery….

Orthopedic doctor: Surgery went great, I cleaned out your hip and got everything. I even cleaned up some of your old football injury. From my perspective you are 100% cured.

Rheumatologist: All the tests I ran for infection such as Strep and Staph came back negative. I also ran a test for Lyme Disease. The test measures 10 Lyme “markers”. If you have 5 out of 10 you definitively have Lyme Disease. You have 3 out of 10. Since three of your neighbors have Lyme and you have a number of the symptoms, especially the severe hip pain, I’m going to treat you for Lyme.

Infectious Disease Doctor: Your Rheumatologist doesn’t know what he is talking about. You don’t sort of have Lyme, you either have it or you don’t. He is not reading the tests correctly. I’m not sure what you have, but it’s not Lyme. Here, take these antibiotics for 30 days and if you still feel bad after that come back to see me.

Are you kidding me? After all I’d just been through, now what was I to do? Crazy thoughts ran through my head. Who do I trust?

After doing a lot of research, Tracey found a great LLMD in our area. LLMD stands for Lyme Literate Medical Doctor. (We go to Loudoun Holistic Health Partners in Northern Virginia. See our more page). After probably the most thorough exam I’ve ever had, I’m now being treated for Lyme Disease and other co-infections, and am feeling much better. What I learned is that there isn’t one answer or test for Lyme. It’s a nasty disease and affects everyone differently. I’ve been lucky and am very thankful as I’m on the better end of the Lyme scale. It could be much worse.

Meanwhile, my sister, who lives in Connecticut, close to the epicenter of Lyme Disease, asked me if I “SPRAYED MY YARD FOR TICKS.” I had never heard of such a thing. She said that she had her yard protected from ticks and so did most of her neighbors. I started doing some research and sure enough NO ONE was treating my area for ticks and mosquitoes. The need for more information, prevention and protection was huge.

After the pain, brain fog and stress of dealing with Lyme disease we decided we didn’t want anyone else, especially a child, to have to go through what I went through.

And as the old saying goes, “necessity is the mother of invention” so we founded Backyard Bug Patrol, to help control and combat the potentially deadly effects of ticks and mosquitoes here in the Maryland/Virginia/DC area.

Since writing this, my 11 year old son JT has been tested and diagnosed with Lyme disease. He is now on a Lyme protocol and has gone gluten free and sugar free. We are heartbroken but he is in good spirits and looking to get better.

Things have gotten worse for us. Not only was my son diagnosed with Lyme but so was my wife, Tracey and young daughters, Gianna and Francesca. This has become an epidemic for my family. We are all on treatment. It is truly unbelievable. Our LLMD has a 500 person waiting list. Our government officials are sticking their head in the sand about the Lyme epidemic.

I have finished treatment for now. It was a long haul but I am feeling much better. My doc is going to reevaluate in a few months. JT is almost done with his treatment.

Tracey and JT are finished with their treatment. The girls have another month and a half to go. We are all feeling much better. There has been a tremendous change in my kids. They almost look like different people. Plus, JT and Gianna had previously struggled in school. Now, they are both getting really good grades. I’m very thankful that we all have responded well to treatment. There are a lot of poor people with chronic Lyme who just don’t. I hear from them regularly. It’s really scary to think that this time last year I was on a downward spiral…

God, it seems like this will never end. JT’s Lyme markers were up. He is back on treatment.

The good news is that Gianna has finished her treatment. The bad news is that it looks like I might have to go back on. Uggggg! My Lyme markers were up…

Tracey hasn’t been feeling well.  Her Lyme markers are up.  She is back on antibiotics.  The treatment did not go well.  Tracey had a bad reaction to the antibiotics.

Tracey’s Lyme markers are up.  Our doctor wants her back on antibiotics.  Going to try a different blend that might agree better with her.

Things took a turn for the worse.  Tracey’s Lyme markers are worse than they have ever been and she is on antibiotics again.  JT and Francesca are back on treatment as well.

Fast forward to 2019 and all of us are doing relatively fine.  For Tracey and I, I’m not sure where Lyme Disease ends and the creaks of older age begin:).  The kids are doing well.  JT is playing D1 football in college and has the highest GPA of his class.  Gianna is getting ready to go to college and hopes to play soccer at the D1 level.  Francesca now has a 4.0 in high school and has excelled!  It’s hard to imagine how far they have all come from struggling in elementary and middle school to where they all are now.  We are truly blessed.