Destiny?  Truly, the Mitchell and Durkin families were meant to be in the tick and mosquito eradication business.  This is the story of how Patrick contracted West Nile Virus in the summer of 2012 and the aftermath.

The latest drama began in June 2012.  We had just finished working through our busy season during the months of April and May where we book most of our new seasonal customers.  In June things slow down a bit and Patrick and his family decided to take a much deserved trip to the beach. 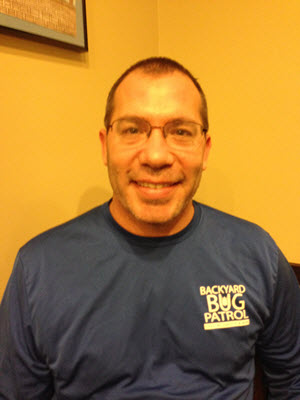 Pat is an athlete.  He is in his early 40’s and was a former college lacrosse player and has kept himself in great shape.  Patrick and Kim are the parents to two beautiful little girls, Kylie and Molly.  While the girls relaxed on Rehoboth Beach, Pat, not one to sit still very long, decided to play a round of golf with a buddy from college.  I remember Pat calling me to check in midway through the first round and commenting how bad the mosquitoes where and how we needed to open up a Backyard Bug Patrol office on the Eastern Shore of Maryland and in Delaware.  He said he was getting eaten alive.

Shortly thereafter, Pat started feeling horrible.  He thought he was coming down with the flu or worse, a heart attack.  He felt achy, had chest pains, and a horrible headache that wouldn’t go away.  Pat’s a tough guy and didn’t think too much about it and certainly wasn’t going to the doctor to get checked out…  Keep in mind Pat’s father died very young from a heart attack when he wasn’t much older than Pat is now…

Two days later they took the girls to an amusement park on the board walk and not wanting to disappoint the girls decided to take them on the rides.  Their final ride that evening was on the “Gravitron”, that’s the one that spins around in a circle and pins your back to the wall as the bottom drops out and you hang in the air stuck to the wall as the extreme G-Forces press your head to the wall.  Not more than three steps after getting off the ride and half a sentence later Pat’s father-in-law grabbed him as he began to collapse.  He was completely incoherent.  White as a ghost, not making sense and not snapping out of it, they threw him in the back seat and took him to the emergency room.

Still completely disoriented at the hospital, the emergency room doctor decided to admit Pat for the night to figure out what was going on.  Given his family’s history of heart disease they immediately ran a bunch of tests and hooked him up to the echo cardiogram machine.  He wound up staying in the hospital for three nights.  They couldn’t figure out what was going on.  The docs ran all the standard test and at one point were convinced it was Lyme Disease and put him on antibiotics.  They pumped in drugs and fluids.  Finally after the third night they let him leave.

Pat was a mess.  He couldn’t really function at all and looked horrible.  Over the next few weeks he continued to get worse and his symptoms began to mount.  The lymph nodes in his head, neck and chest became swollen.  At one point his under arm became so infected he had to go back to the hospital to have it lanced.  He had extreme headaches.  Every day a fever would spike.  He was pale and had night sweats.  He saw a cardiologist, internal medicine doctor, infectious disease doc and a general practitioner.  Their consensus was that they thought he had Lymphoma.  Imagine the pain of being a 42 year old father of two very young girls being told you have cancer after your own father had died at a young age when you were still a kid…

By now it’s mid-July and Pat had been to see doctors at Georgetown and Johns Hopkins.  They scheduled him for a PET scan.  The PET scan is supposed to scan your body for any signs of cancer.  Pat was told if there was any cancer in his body it would show up on the scan.  They juiced him up with red dye and ran the hour long scan.  Pat and Kim waited a stressful day and a half for the results.  Pat was told HE HAD LYMPHOMA.  He was scheduled to have a biopsy of a lymph node at the end of the week.

That evening after the scan, he broke out in a full-body rash.  The doctors ordered him back to the hospital and they put him on Prednisone to reduce the swelling and rash.  They thought that it might have been a reaction to the red dye.

Interestingly, the Prednisone reduced the rash and at the same time, his headaches lessened and the swelling in his lymph nodes went down, so much so that they decided to cancel the biopsy.  Now what?

Looking for answers Pat and Kim went to a specialist in Bethesda whom they were told was sort of like a local “House”, type of doctor…just like the TV show.  He ran a number of tests and checked for a lot of different things.  Nothing.

Pat was frustrated.  Kim was more frustrated.  Kim, a scientist with the government, wasn’t going to sit idly by and watch her husband continue to deteriorate.  Every day he looked worse and worse.  At one point she even said to me she thought he might die.

Kim did relentless research on line and her findings kept pointing back to West Nile Virus.  Pat had all the symptoms of a classic case of West Nile Virus.  They went back to the “House” doctor in Bethesda.  He still didn’t have any answers but wanted Pat to take another PET scan.  Kim brought up West Nile and the doctor quickly dismissed it.  “No way it was West Nile”.…up until that point every doctor that Pat and Kim had seen all had been sure it wasn’t West Nile.  “House” wouldn’t even test Pat.  Kim insisted.  She would not leave the office until he agreed to test for West Nile.

It’s now early August and Pat seems to have stabilized.  He finally gets a call from “House” who leaves a message on the answering machine…It is confirmed, Patrick HAS WEST NILE VIRUS …Now what?  What is the treatment?  With hat in hand, the doctor tells Pat and Kim that he had passed the acute stage of West Nile and had weathered the worst of it and that there was nothing for him to do at this point other than to continue to rest and gain his strength.

Pat, ever the responsible guy that he is, called the Maryland Public Health Office to report his case of West Nile Virus.  He was told, and I kid you not, that since Pat had already passed the acute stage and was through the worst of it, it was not going to be reported as a West Nile Virus case this year and that the Public Health officials were only concerned with active cases.

So, to restate what happened, Pat saw probably 8 or 9 different doctors and not one thought to test him for West Nile.  It was only at the insistence of his wife Kim that the test was even conducted.  Then, he does the responsible thing and calls the Public Health office and they don’t want to hear about it???  Can that be possible?

Today, (September 2012) two and a half months since this whole ordeal began Pat is feeling much better.  He has slowly started working again but still gets fatigued very easily and gets bad headaches.  He clearly doesn’t look as pale as he did and he’s starting to put on some of the thirty pounds he had lost.  Much like the Mitchell’s frustration with Lyme, Pat and his family just want to know when it’s all going to be over and when he’ll be back to his old self again.