Deer ticks are most commonly known for transmitting Lyme disease, but did you know that they can also be responsible for the transmission of other tick borne viruses too?  Here’s an article that has further information about 6 other potential diseases that you could be at risk of, from an infected tick bite.

The deer tick, also known as the blacklegged tick, is a fascinating but nasty little creature, and it’s spreading. The tiny arthropods carry Lyme disease — the serious illness that we most associate them with — but that’s not the only pathogen they spread.

With the winter being warmer than usual this year, ticks have thrived in the warmer weather, which means it could be the worst season in years when it come to the threat of Lyme disease. This report shares how Maryland could have a troublesome time with ticks.

The impact of an above-average tick season is hitting Maryland families hard this summer. As Maryland approaches peak tick season, doctors are reminding Marylander to cover up. Scientists predict this could be the worst lyme disease season in years. More than 1,200 cases of lyme were reported in Maryland in 2015 and this year is expected to be even worse.

You can take some simple steps to help protect your family from Lyme disease. 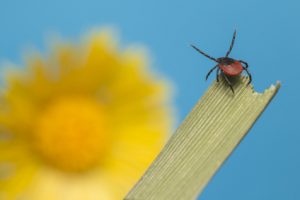 They may be tiny, but ticks have the potential to cause serious health issues to many of us. None of us are safe or immune, so we need to take protective measures.