Home » Pest Control » What Do You Know About Capybaras?

What Do You Know About Capybaras?

Most people imagine that rodents are tiny but have the ability to multiply at a fast rate within a short period of time. This, for the most part, is true. To give you the stats, if rats invade your home and they stay hidden for a year, those two rats can multiply to around 1,250 by the end of that year. Yes, you read that right-one year.  It is therefore wise to deal with rodents immediately when you see them on your property. If you wait too long before you deal with them, you may end up with a huge loss.

Now imagine a huge rodent invading your home. A huge rodent like the capybara. It is the biggest rodent in the world (so far). Enjoy learning more about it in this post.

What is a Capybara? 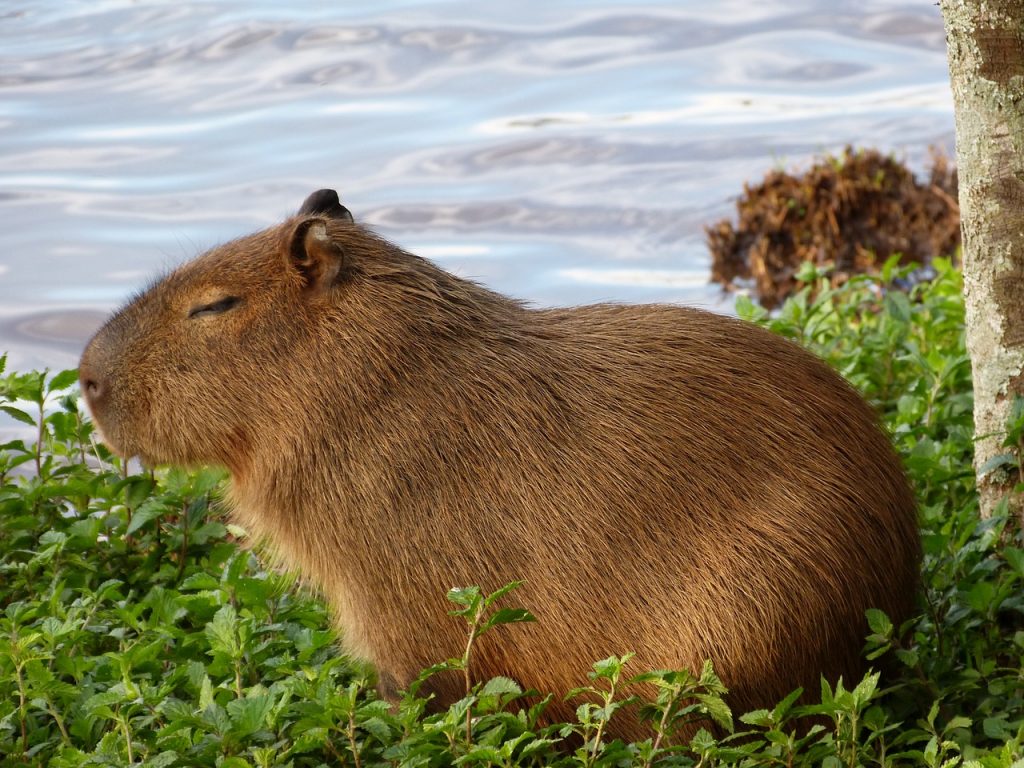 The capybara is from the genus Rodentia. It is a friendly rodent that responds positively to human beings but most times you just don’t want them near you or your home. This is because in as much as they are friendly they can cause great damage to plants in your home. They have webbed feet and facial features that make them excellent swimmers.

Capybara is widely known to be the largest living rodent on earth, almost twice the size of a beaver. Capybaras are found all over the South American continent and are known under different names, such as Capivera in Brazil and Carpincho in Paraguay, Argentine, and Uruguay. These semi-aquatic rodents are more closely related to guinea pigs. They are found in wetlands and savannas that are located near large bodies of water such as lakes, and marshes. These rodents are found in abundance and have also been farmed in an effort to ensure that wetlands are protected from their rapid breeding. Being the largest rodent with webbed feet, they are also found in zoos and parks as well. They are very social semi-aquatic creatures and can be found in groups of approximately 10-20 individuals. Read more from Kidadl… 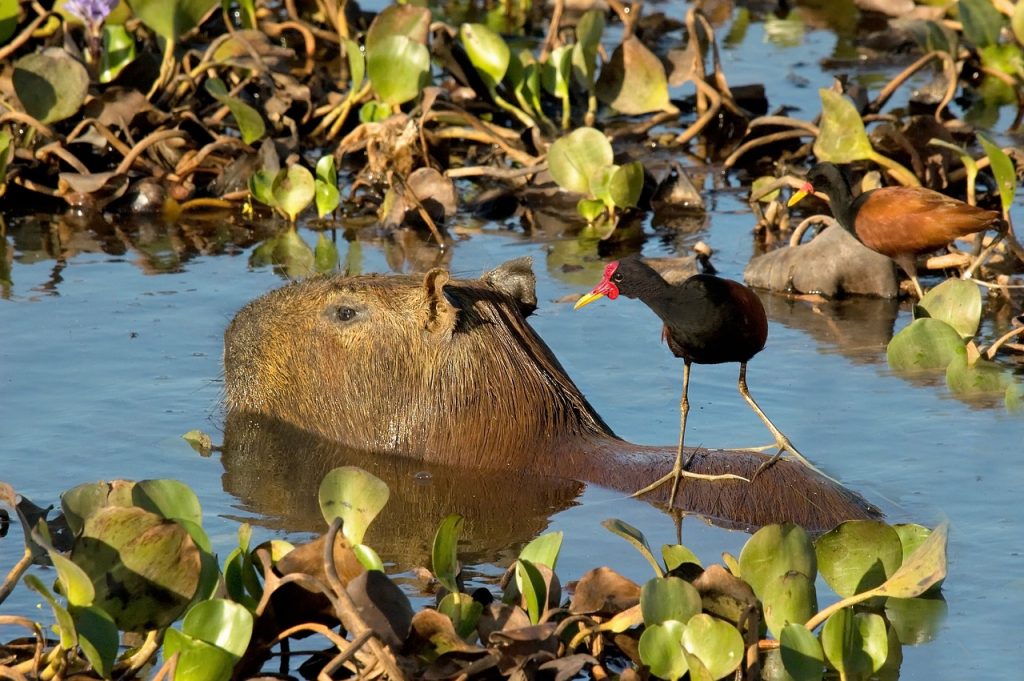 The interesting part of the Capybara mating process is that they do this in water. And if by any chance a female doesn’t like a certain male when in the water, the female hides in the water and that’s it. The deal is over for the male. On average a female gives birth to four young ones but can give birth to as much as eight in one go.

In a Capybara herd it is only the dominant male that has the breeding rights to the females, and although it can occur all year round depending on the conditions, the breeding season tends to be during the rains in April and May. After a gestation period that lasts for around five months, the female Capybara gives birth to between 1 and 8 pups on land. Capybara young are very well developed at birth and not only have all their fur and can see, but are also able to run, swim and dive within hours of birth. The female rejoins the main group within hours with her newborn offspring, which begin to eat grass after about a week (although they will continue to suckle milk from their mother until they are around four months old). Read more from A-Z Animals…

The dangers of the Capybara as shown in Argentina 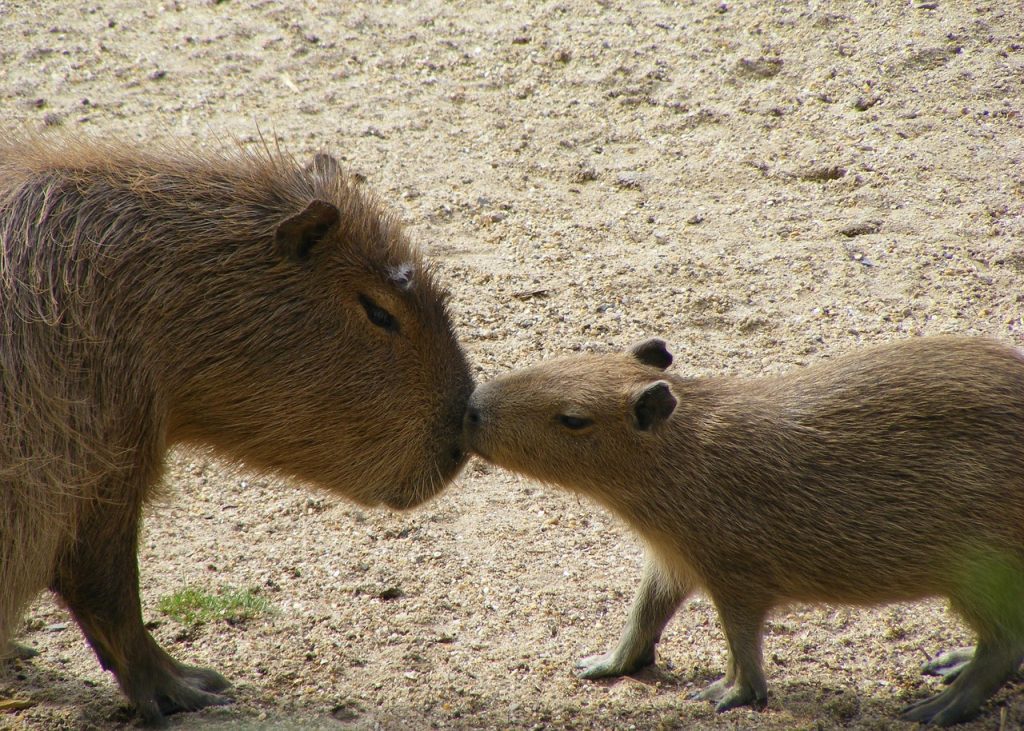 As seen above Capybaras are native to South America in countries like Argentina. Most recently a town in Argentina got to experience for the first time a capybara infestation. This happened when the creatures took over the town causing traffic jams and in some extreme cases even causing harm to homestead pets. It was a perfect example of how rodents take over spaces.

Capybaras have destroyed lawns, caused traffic jams and even bitten residents’ dogs in a community in Buenos Aires, Argentina.

Local residents in the Nordelta district of the country’s capital city have complained about the rodents’ intrusion. Some have even pointed guns at the capybaras, though they are forbidden from touching or harming them according to wildlife officials in the area, local news outlet La Nación reported.

Adult capybaras can grow up to 3.2 feet in length, stand over 24 inches tall, and some can weigh up to 132 pounds.

“They not only destroy gardens, but their excrement has also become a problem,” one local man told La Nación.

Some in the country are celebrating the capybaras, referred to Capybaras has carpinchos in Argentina, invading the wealthy, gated community that sits on the wetlands of the Paraná, one of the world’s largest rivers. Read more from USA Today…

The capybara is a perfect example of how rodents can multiply and invade spaces even where there is human habitation. This can happen anywhere in the world starting from your home. If you have a rodent infestation, don’t shy away from calling the experts to help you out. You can reach out to Backyard Bug Patrol in Maryland and we will get rid of any type of rodents for you. Call us today!